Facebook
Twitter
Pinterest
WhatsApp
Share this on WhatsApp
In stifling heat, a Saudi security guard sprayed Muslim pilgrims with water as they advanced through Mina for the final rite of the hajj, the “Stoning of the Devil” that has proved lethal in past years. 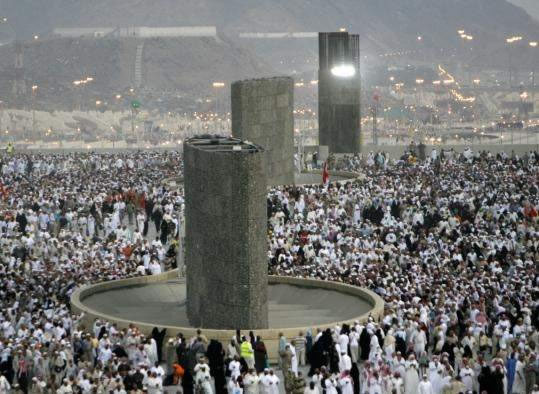 Pilgrims gathered under the scorching sun in Mina on Friday for the final major ritual — the symbolic Stoning of the Devil — at the Jamarat Bridge, the scene of a stampede in 2015 that left 2,300 people dead.

Saudi Arabia reported no major health or safety upsets at the Jamarat Bridge, as the Muslim faithful made their way through the last leg of the five-day pilgrimage.

For many, the pilgrimage, which all Muslims must perform at least once if physically and financially able, has been a lifelong dream.

Amin Hashkir, a 26-year-old from Casablanca in Morocco, travelled to western Saudi Arabia, home of the holiest sites in Islam, together with his sister and mother, who was unable to physically perform the stoning rite herself.

“My father passed away in 2011, and we’ve been trying to make it here ever since to perform hajj for him,” Hashkir explained on a sidewalk in Mina, near Mecca. “It was what he felt was missing from his life.”

Hashkir’s mother was also counting on her son to fulfil her dream of hajj. “My mother is sick, so I offered to throw the stones for her.”

The 2015 stampede was the deadliest disaster ever to strike the hajj, one of the five pillars of Islam.

Hundreds more lives have been lost in several stampedes during the stoning ritual over the past 20 years.

Saudi Arabia says it has deployed more than 100,000 security personnel to keep pilgrims safe this year.

The state-run SPA news agency on Thursday reported more than 2.35 million people were participating in the hajj this year, including 1.75 million from outside the kingdom.

Authorities said on Friday there had been no major health or safety upsets in Mina this year.

Colonel Sami al-Shweirekh, head of outreach at Saudi Arabia’s General Security, hailed the “success” of the intensified security measures at a press conference.

Hours earlier, huge crowds dotted with colourful umbrellas to shield pilgrims from the sun took part in the stoning rite under strict surveillance, with police tape-guiding the flow of pilgrims, cameras everywhere and helicopters hovering overhead.

“It’s different every year,” said Najat Malik, 45, a Sudanese Red Crescent employee who travelled from Khartoum for the hajj.

“Some years there are less pilgrims because of fears and warnings of disease. But this year, I feel like there are a lot more people here.”

Traditionally, seven pebbles are thrown at a post representing the devil, emulating the actions of the biblical prophet Abraham.

Since 2004, it has been replaced by walls to accommodate the rising numbers of pilgrims.

By Friday afternoon, temperatures had reached 41 degrees Celsius (106 Fahrenheit), with many suffering from dehydration or heat exhaustion.

“Two pilgrims fainted right in front of me this morning,” said Almas Khattak, a Pakistani volunteer in Mina.

At the bridge, an elderly woman had collapsed onto a stretcher as her relatives tried to revive her, splashing her face with water before calling for assistance.

The shadow of the 2015 stampede still looms large over the ritual.

Iran, which with 464 dead reported the largest number of victims in the disaster, did not send its pilgrims last year to the hajj in Saudi Arabia, as authorities in the two countries failed to agree on logistics.

Iranian authorities say more than 86,000 Iranian pilgrims are taking part this year, each equipped with an identity bracelet in case of any accident.

The stoning ritual, which lasts until Sunday, marks the first day of the Eid al-Adha feast, or the feast of sacrifice, which commemorates Abraham’s willingness to sacrifice his son.

The holiday is marked by the sacrifice of sheep instead by Muslim communities around the world.

5 unbelievable places you should visit

Say goodbye to creased shirts with this travel-packing hack