Facebook
Twitter
Pinterest
WhatsApp
Share this on WhatsApp
A suspect, who claims to be a farmer, Usman Jubril, has been arrested for allegedly vandalising a solar energy system installed in Government College, Ajara, Badagry, Lagos State. 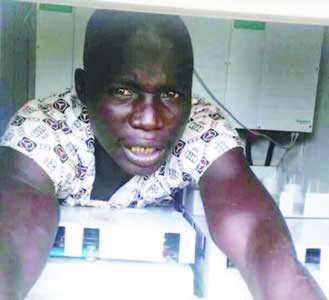 It was learnt that the drunken suspect was apprehended by operatives of the Nigeria Security and Civil Defence Corps after he slept off at the scene of the crime.

The 22-year-old indigene of Maiduguri, Borno State, was arrested along with one Emeka Ugonna, who allegedly attempted to steal a car parked by the roadside at NEPA Quarters, Ikeja.

Some items, including a key and a magnet, were allegedly recovered from Ugonna.

Jubril confessed to the crime, saying he acted under the influence of alcohol.

The father of two explained that he had gone to have fun on the premises of the school on September 2, after selling his goods.

He said, “I am a farmer and live in Ipokia, Ogun State. I took cassava and corn to Badagry, but I didn’t make enough sales.  I took the goods to Seme, where I sold everything. I came back to Badagry in the evening to have fun.

“I bought three bottles of gin and went with them to the school to watch a football match. I drank everything and took 500ml tramadol. In drunken stupor, I threw a stone at the glass housing the solar system and it broke. I went inside the facility and slept off.

“I smoke Indian hemp, but that was the first time I would take alcohol. It was the drink that affected my faculty. I didn’t even know how I got to their (NSCDC) custody.”

COVID-19: Countries we are looking up to for assistance are also facing challenges – FG

Oil And Sugar: The fastest way to remove stretch marks